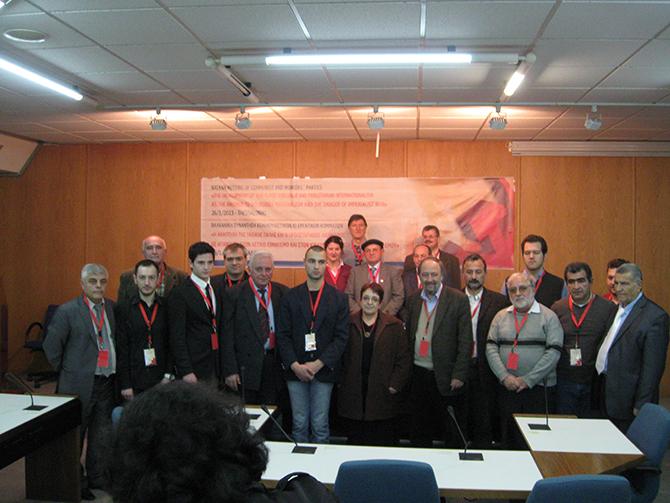 The development of the class struggle and proletarian internationalism as the answer to bourgeois nationalism and the danger of imperialist war.”

For our effort to be effective we must create a basis so as to achieve a higher level in the collective examination of the developments, to contribute to the strengthening of the ideological- political and mass struggle of the communist parties in the region, to take the appropriate steps that will lead to the strengthening of the communist movement in a revolutionary direction.

The region of the Balkans is a region of great strategic importance.

The Balkan is attracting the imperialist powers like a magnet and makes our region an important arena for the manifestation of the inter-imperialist contradictions and their strategic goals. The bourgeoisie and the bourgeois political forces in the states of the region play an active part in these contradictions; they are part of the problem and support they are essential part of the constelation of imperialistic oppression and exploitation imperialist unions in order to serve their own interests.

Let’s remember one of the key roles that burgeiusue, which appeared as an aftermath of aberration of planned economy and the beginning of privatization in Yugoslavia, had in the process of Yugoslavia’s destroying.

From a coherent communist point of view no wink to the class enemy and its institutes is acceptable in terms of even a temporary freezing of the class conflict in the name of “saving the country from the crisis” which the working class is not responsible for. This way it would not the country to be saved, but only the rule of capital. On the opposite, the bourgeoisie should be pursued and nailed to its responsibility by a relentless struggle to 360 degrees, aimed at overthrowing its dominance and establishing the workers’ and people’s power.

This goal definitely requires a break with the international institutions of the imperialist bourgeoisie. Communists should firmly fight for their countries to leave the EU, NATO and the illegitimate Hague International Tribunal, aiming at their final dismantling, along with other tools of the imperialist oppression, the IMF and the WTO. UN have long ago turned into a body of ratification of the imperialist military aggressions masked as humanitarian interventions and also need an urgent revision of its representational and operational criteria and decision-making mechanisms. Tribunal for the Ex-Yugoslavia in the Hague, which is both, officially and formally under the UN command proved to be just another lever of the imperialism which doesn’t aim to discover the truth in any way about the fratricidal wars held on the territories of Ex-Yugoslavia during the 1990s, or to achieve conciliation between the estranged nations, all because of the imperialistic goals. That is why we repeat that it is important to dismiss all the shameful verdicts that put the complete burden of guilt for bloody wars on Serbian side, which accomplishes the goal of escaping any historical responsibility by the ones who were the most responsible for the conflict- western imperialists. Additionally, recent acquittals of Croatian generals Gotovina and Markac, and undoubted war criminal and leader of Albanian terrorists, Ramus Haradinaj, once again, have evoked chauvinistic characteristics of nationalism over the territories of EX-Yugoslavia. On the one hand, creating the construed feeling of national pride despite the material-economic humiliations and astonishing loss of rights on one side, and feelings of national humiliation and defeat on the other. Dear comrades, I would use this opportunity to remind you that our party has submitted special resolution at the previously held meeting of communist and workers’ parties last November in Beirut regarding these shameful verdicts of the court of injustice in the Hague.

Necessary urgent duty for the peoples to reject and oppose the policy of “divide and rule” which aims at the emergence of new and weak states, in fact protectorates, as it is the case in face of the situation emerging in the Kosovo. Today the imperialist plans and rivalry may cause again bloodshed in the region. The policy promoted by the imperialist powers aims not only to the intensification of the foreign interventions but also to the establishment of governments servile to the imperialist dictates, of regimes that will further deepen the capitalist exploitation and bind their countries to the imperialist organizations of NATO and EU.

The worsening of workers’ life standards in the Balkan countries, the reinforcement of the imperialist organisations, the measures of repression against communists and the anti-imperialist movement that are taken throughout Europe, also increase the need to act in a better, more organized and coordinated manner through the ranks of the anti-imperialist, anti-NATO and mass labour movement.

The main condition, though, in order to further develop our action, to pave the way for people’s power, socialism, is to reinforce the role of Communist and Workers’ Parties. This would facilitate a better coordination of action and joint activities among the CP.

We consider as an important element the labour solidarity and unity that can develop among workers in the Balkan peoples, in the mobilizations that take place in Balkan countries. That requires the CP to promptly inform about these mobilizations and assist the communication of the class trade union forces that struggle against the anti-people measures and the provocations of the employers.

We daily note the need to reinforce the work in the working class, in order to recruit new forces in the trade union movement and to establish trade unions in which the class oriented forces will play a leading role.

We need to contribute with all our forces to the strengthening and broadening of the peace, anti-imperialist movement; to repulse NATO plans through the reconstruction of the Balkan Anti-NATO Center, against the imperialist military presence in the Balkans, the foreign bases and troops, the participation of military forces from Balkan countries in NATO and EU missions in other countries such as Afghanistan, Iraq, the Persian Gulf and elsewhere.

We must demand the return of troops from the Balkan countries that are currently abroad and to end the engagement of our countries in new imperialist wars.