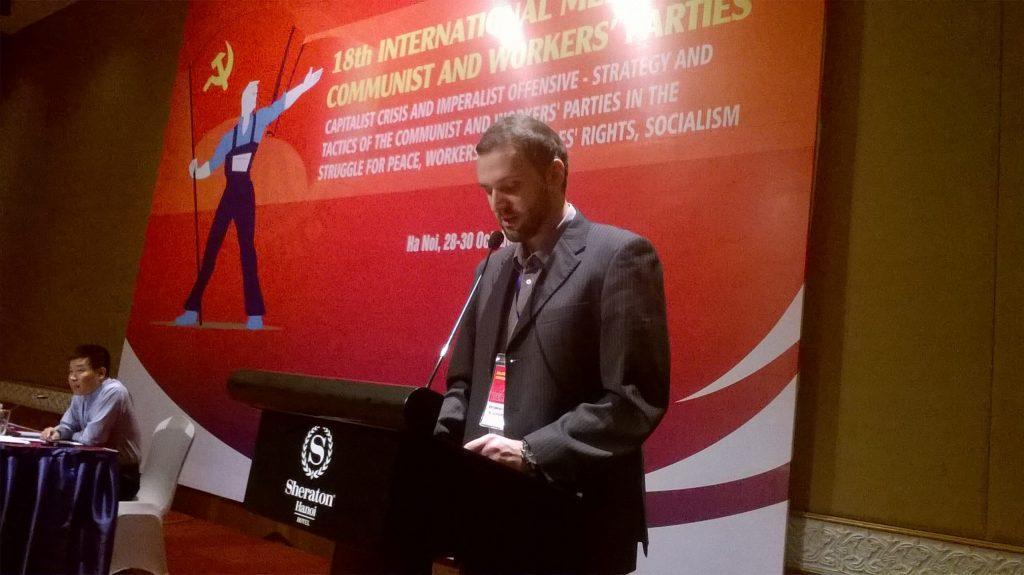 Dear comrades, I warmly salute you all on behalf of the New Communist Party of Yugoslavia, and I convey to you the militant greetings of our members and sympathizers.

It is a great honor and pleasure to speak at a Meeting of Communist and Workers’ Parties of the world in the capital city of the nation that is victoriously struggled both against colonialism and imperialism, which determined its destiny and future by building of socialism under the leading role of communists headed by such a gigantic figure of our movement as it was comrade Ho Chi Minh. The brave people of Vietnam had defeated the Japanese militarists, the French colonialists and American imperialists, Vietnamese had provided an example to all justice-loving and freedom-loving peoples of the world how to fight for their freedom and independence. Let this triumphant spirit continue to inspire us in our further joint struggles, let it inspire all of us, delegates at the 18th Meeting of Communist and Workers’ Parties of the world, for which organization we thank to the Communist Party of Vietnam.

For 18 consecutive years, we are organizing an International Meeting of Communist and Workers’ Parties. Our New Communist Party of Yugoslavia was decided 18 years ago to actively participate in these meetings, because they are the way to move toward a goal which was then, as well as it is now, an important precondition of the new growing and strengthening of the single block of the internationalist struggle of Communists, a way toward the creation of the new Comintern. As much as this goal, the creation of the new Comintern is at this given moment unrealistic, we are aware of the importance of these meetings. First of all this is obvious regarding the importance of our mutual solidarity. It is wrong to think that the party, whether they are large or small, ruling or illegal, do not need internationalist solidarity and support of fraternal parties of the world. There is no such party, at least there is no such Marxist-Leninist party.

In order to respond to the topic of this year’s meeting, that is all about strategy and tactics in our struggle, I want to share with you on behalf of my party our vision of actualities that are signifying conditions of our struggle, at the general international level, as well as on the level of our region and country, and to explain to you our tactics in struggle. Therefore, I am particularly pointing out several issues:First, our views on actualities from international developments:

1 – The crisis of capitalism is not over. Bourgeois economists cannot find any cure that would encourage real and sustainable growth, there is no new model and functional method, and it cannot be found because the system has not changed, capitalism cannot be repaired.

2 – For the purpose of its self-preservation, capitalism that is in the stage of imperialism continues to escalate aggressions and bloodsheds. The possibility of the outbreak of World War III is dramatically easier to imagine today than it was only 10 or 15 years ago. It is becoming clear what we were talking about 7-8 years ago, and that is that the wounded beast is the most dangerous. War conflicts caused by imperialism and led by imperialists are going on in many countries, in Syria, Iraq, Sudan, Yemen, Libya, Afghanistan, Palestine, Ukraine and other countries. On behalf of our country and our people that also passed through the horrors of wars in its recent past, we express particularly great solidarity with the peoples of these countries.

3 – Spread threats of ISIS, growing religious fundamentalism and terrorism, growth of fascism represent the reflection of the nature of capitalism, sharpening of its inequalities and hopelessness of the poor, while, at the same time, the direct interest and guidance of imperialists is very obvious.

4 – NATO, the striking fist of imperialism and the greatest danger to world peace, continues with dangerous provocations against Russia, China, in the zone of the Pacific, the Middle East, against DPR Korea and elsewhere.

5 – The dangerous developments in many countries in Latin America, where right-wing came to power, forces sponsored by the United States, requires our solidarity with the peoples of these countries in these difficult times.

6 – We also express solidarity with the people whose soil is robbed, water and other natural resources, whether it comes to the so-called developing countries or as it was case recently in the “first country of imperialism” – the USA.The next issues concerns our region, the Balkans, and our country:

1 – Serbia is still a partly occupied country, more precisely its southern province of Kosovo and Metohija. The latest actualities in the development of the occupation of Kosovo are related to the privatization of the assets of the Serbian state in Kosovo, as is the case with large mining complex of Trepča. Among monopolies that are involved in privatizations, are the companies of US general Wesley Clark, who was in position during the war of 1999.

2 – That capitalism is at the stage of imperialism, where monopolies at international level are socializing the labor in their favor, Serbian workers felt well on their own shoulders in companies like South Korean Jura and Samsung, or Italy’s Fiat and Geox, and many other monopolies which conducted an unprecedented exploitation that has taken on dimensions of the scandal in Serbian society.

3 – Serbia is gradually entering NATO. Negotiations with the Serbian government are going on, and they will be more concrete after the visit of Prime Minister of Serbia to Brussels in late November. The current arrangements ensure that NATO troops can move freely through the territory of Serbia, and that they can benefit and use our military facilities, like military barracks, the same ones that were restored after their bombing.

4 – NATO announced a new expansion in the region. Montenegro is the newest target. Several NATO member countries have already ratified the agreement of accession of Montenegro, despite the fact that the recently held elections in Montenegro showed that the vast majority of citizens do not want their own republic in NATO.

5 – Unilateral solutions and moves that Western imperialists implement through their puppet regimes and politicians in the Balkans, with provocations against Russian interests also visible in our region, suggesting the possibility of renewed armed conflicts, is proof that there is no peace and reconciliation in the Balkans until its destiny is solely in the hands of Balkan peoples.

6 – A large wave of refugees from war-torn areas, such as Syria, Iraq, Libya and Afghanistan is not reduced, and the so-called “Balkan route” operates in undiminished volume. Solidarity with the people whose destinies are dismantled by imperialists!Finally I will take the opportunity to explain tactics of our struggle presented through our current activities:

1 – At the end of November last year, our Party has held its IV Congress. Congress affirmed the party program based on the class-oriented line of orthodox Marxism-Leninism, against decades of conceptual weakening of our movement in our country when it was led by the idea of so-called self-management socialism, or titoism, which we fully reject as harmful reformist and opportunist views and tactics. Congress also confirmed opposition to ideological and political disintegration through harmful unification and drowning in parties and movements that do not have a consistent Marxist-Leninist orientation.

2 – Our party has come a long way in the process of rejuvenation of its leading cadres in party organs, and that process continues. We are proud that we are among the communist parties with youngest membership in the region, which is in line with the slogan that communism is the youth of the world. The new generation of communists that have grown through the struggle in our ranks, are stocks for the future of our party, its militancy and determination.

3 – The good news are that at the recent Congress of the WFTU in South Africa in its membership is definitely enrolled for the first time one Serbian trade union – “Sloga”, with which our party has a very close cooperation. This is important for the better connection of the party, cadres and activists on the ground with the workers and the trade union movement in Serbia, which stands on class positions, against opportunism.

4 – In addition to organizational strengthening of our positions in the workplace, in the streets, among pensioners and other social categories, we put a lot of hopes in the successes of our student organization “Student front” that successfully mobilizes student masses in the struggle for totally free, accessible and quality education for all.

5 – In addition to the Internet propaganda and activities in this field, we have renewed regular publishing of our organ of the CC – “New Communist” that was previously only sporadically published. We are aware of the importance of the journal in organizational, agitation and theoretical terms.Comrades, hard times for the Communists are still here. Persistent and bitter struggle which obliges us to continue to hold firmly a red banner of Marxism-Leninism in our hands while marching towards the future.

We are willing to learn from others and to point out what we think that is right. In addition to the differences that we have among ourselves, we have an obligation to agree on a clear vision of the world of the future, the world of socialism-communism. As our agreement of this vision is clearer and more precise, the easier it will be accepted by the masses of the working people of the world.